Shift your Beliefs & Attract the Prosperity you Desire

A definition of consciousness that I resonate with is the following: “the beliefs, thoughts and feelings, collectively, of an individual or of an aggregate of people”. Your current set of beliefs, and the feelings associated with them, create a particular consciousness. For instance, if you believe that “money is the root of all evil” or “it is more enlightened to not be rich “ or “money is very difficult to keep or get (in one pocket and out the other)” or “you have to work hard for your money” or “money is scarce”, then your consciousness will attract circumstances in your life that will confirm your beliefs.

Change your beliefs and you will change your consciousness!

There are many principles in creating a success and wealth consciousness, but we can begin to cultivate one by mastering one principle at a time.

One process to begin with in creating a success and wealth consciousness is to do the following:

1) get in touch with your limiting belief about money

1) What is a limiting belief or story that you have about money? Make it brief and no more than one sentence.

3) Create a new empowering belief, which is both positive and is the opposite of your prior limiting belief.

Let me know if you have any questions. I look forward to hearing your results.

By the way, this really works. Last year I let go of the belief that “in order to have money I have to earn it and work hard for it”. Soon after I released that belief we sold 2 pieces of properties with the same investor and netted far more than we had anticipated, all within 2 months after releasing this belief. Changing this one belief alone has contributed to a very different consciousness, one of attracting abundance with ease.

In my next newsletter I will share with you another strategy for creating a wealthy mindset and consciousness.

One Response to Begin to Create a Wealth Consciousness 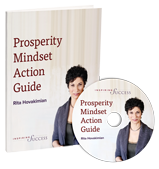 How to Stop Undercharging, Confidently Raise your Rates, Own your Value, and Increase your Financial Prosperity.